Skyward
It’s the bane of every customer who’s ever bought an apartment under construction. Delayed deadlines, surprise costs and contractual back-footing that the developer blames on technical hitches in construction or lack of building permission. Across metro cities in India, as congestion in urban arteries pushed companies to engage in verticalisation or building upwards for lack of space in city centers, the challenges have multiplied.
The real estate sector is capital-intensive. You incur high cost for land, holding cost for approval and construction, debt for construction and marketing.  So, at one end, there’s pressure to finish a project on time. On another, there’s a 200 metre skyscraper, which requires the moving of millions of tonnes of concrete into the sky, says Gulam Zia, executive director at property management company Knight Frank India.
Over the past decade, construction capability has evolved. Companies now take a week to complete a slab cycle, where it used to take them three weeks for the same work. A handful of players that include Larsen & Toubro, Panchshil Realty, Sobha Developers and Lodha Group are using tech to push through in a difficult business.
“Construction like prefab, composite and steel structures are all geared to reduce time. Generally, the cost is slightly higher but time saved and interest saved in loans is beneficial,” says Sanjay Dutt, chief executive officer for India operations and private funds at Ascendas-Singbridge. 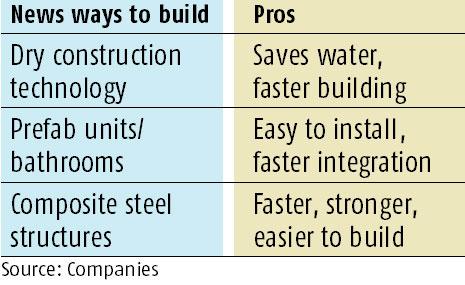 Panschil Realty, a luxury player best known for building the International Convention Centre or ICC in Pune, points to Panschil Towers, homes built entirely with Dry Construction Technology. No bricks, no plaster, and reduced water usage by over a million litres. DCT also involves lightweight construction of interior walls, ceilings and floors, and the use of plastered or microfibre board, joined at the time of installing.
How much quicker was it versus using traditional brick and mortar? Atul Chordia, chairman  of Panchshil, says the German technology he used was 12 per cent more expensive but it took him only three and a half years to finish six buildings that house 600 apartments. “If I had gone the regular route, it would have probably taken around 10 years.” He’s also invested Rs 150 million to set up a factory on the outskirts of Pune to manufacture bathrooms. The units are called BathPods and  are prefabricated self-supporting bathrooms, with floor base frames, walls and ceilings that can be delivered to a site.
B Muralidharan, associate vice-president at the precast plant for Sobha Developers, says they’re using precast technology for a seven million sq ft project that has 66 towers. The walls and supporting structures are developed in Sobha’s own factory, set up in 2015, and snapped together like Lego pieces in the buildings.  The older system of shuttering technology had to wait for both horizontal and vertical elements to dry out and was not as time-efficient.  “A 15-storey tower, for example, that once took 36 months to complete is now being finished in 15 months,” Muralidharan says.
Ramakrishnan P, chief operating officer for the Lodha Group, says he’s exploring the possibility of doing a composite steel structure for a 40-storey commercial tower that is expected to be delivered in between 30 and 36 months. Some methods that Lodha has adopted include precast stair cases, gypsum partition walls, automatic jump forms and aluminium shuttering systems. He says these systems have helped their slab cycles to average between five and eight days, depending on the height of a building.
Though all this technology to pinch construction time is available, how fast it is deployed is still a call that remains the prerogative of the developer. “Who decides whether the engineers are going to be building slab a week or one a month?” asks Zia. “Remember that projects are delayed not because they can’t be finished faster but because most of the time, there aren’t enough buyers out there.”